The First Lady was joined at the January 10 event by Diana Flores, world champion quarterback for the Mexico Women's National Flag Football team, who led the team to win the gold medal against the United States at The World Games 2022 in Alabama.

Flores, an NFL Flag Football Global Ambassador, who is helping to promote the development of flag football around the world, was on the field with 30 young players from the program in Mexico City, taking them through the Tochito NFL Flag Football drills alongside the First Lady.

NFL Flag is one of the fastest growing sports globally, empowering youth athletes around the world and instilling a lifelong passion for flag football.  The non-contact format is fun, exciting, fast and accessible for all, with women and girls driving some of the fastest growth.

Flag football is currently played by more than 20 million people of all ages and genders in more than 100 countries providing a structured opportunity to play the game while discovering the importance of sportsmanship, teamwork and friendship both on and off the field.

The event took place at the Chief of Mission Residence, the official residence of the Hon. Ken Salazar, U.S. Ambassador to Mexico. 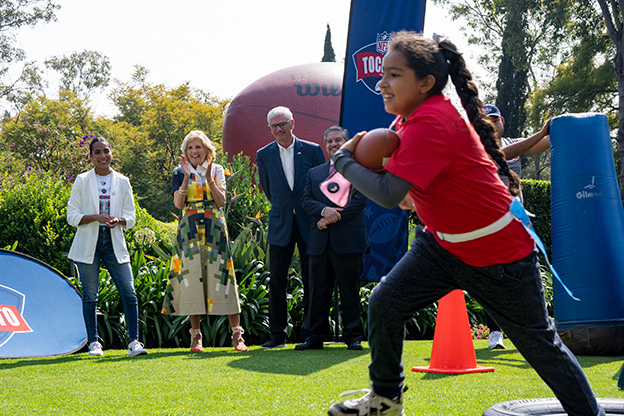 "Tochito NFL is a sport that is empowering young girls," the First Lady said. "I've always said that sport is the international language, and it is about unity and believing in the same values and goals."

Diana Flores added: "I feel very honoured to welcome the First Lady to Mexico and to share the field to celebrate Tochito NFL, a sport that has given me and others so much.  This is an important moment for the boys and girls who play the game in Mexico.  Tochito NFL promotes unity and inclusivity, it is a family, and has allowed women and girls to demonstrate their skills beyond the borders of our country as the game continues to grow around the world."

Arturo Olive, Director General of NFL Mexico, said: "We are delighted to welcome the First Lady of the United States to Mexico City to see our Tochito NFL Flag Football program in action.  NFL Flag football is a fun, inclusive and accessible format of the game that everyone can play and is a great way to connect with new audiences and grow the game at grassroots level, creating visible pathways to play and inspirational role models for boys and girls.

"It was a special moment for the young players and everyone at NFL Mexico, and we want to thank the First Lady for visiting and showcasing this important NFL youth football program that enables more young people to get involved in the sport."

The NFL are actively supporting IFAF's bid for the inclusion of Flag Football at the 2028 Olympics in Los Angeles via the 'Vision 28' leadership group and a range of joint activities to showcase the development and growth of flag football globally.