Indianapolis Colts quarterback Philip Rivers will be heading into the family business when his National Football League on-field playing career ends. Earlier this year, Rivers announced that he will be the head football coach at St. Michael Catholic High School in Fairhope, Alabama.

Rivers’ father Steve was a career high school football coach in Alabama, winning 188 games in over a quarter-century as a head coach. The elder Rivers coached Philip during his time at Athens High School in the late 90’s.

While many people know about Rivers ability to throw the football, most may not know that he began his career as a skinny 6-foot-1-inch linebacker. He took-over as Athens starting QB during his junior year, but he continued to play on defense.

In 1999, the future Hall of Fame quarterback, who earlier this year became the sixth NFL QB to throw for over 400 touchdowns in his career, was touted in newspapers across Alabama for scoring offensive and defensive touchdown in a game against Russellville. 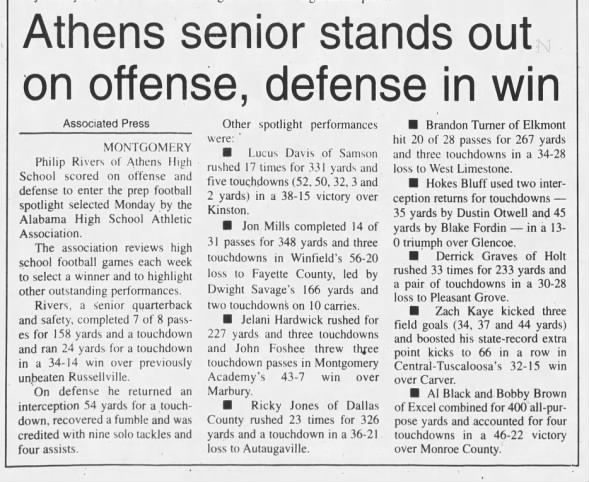 Below you can watch highlights of a young No. 17 for the Athens Golden Eagles, which includes an interception by him at the 1:50 mark.

Rivers closed-out his high school career by being named to Alabama’s Class 5A All-State Team.

On Sunday, Rivers led the Colts to a come-from-behind overtime win over the Green Bay Packers. The Colts are now 7-3 and tied with the Tennessee Titans for first place in the AFC South. The Colts and Titans will meet on Sunday afternoon in Indianapolis