The NFL FLAG Madden 21 Youth Club Championship Presented by Subway® restaurants invites youth athletes from across the nation to represent their favorite NFL teams and compete on the digital turf.

Players can represent one of 32 different NFL clubs throughout the Madden series, hosted on Battlefy, and compete in a 1-on-1, double elimination bracket for a chance to be a finalist in the virtual Championship event around the 2021 Super Bowl and win a PS5 or Xbox Series X and NFL Gear.

To participate, players must have access to Madden NFL 21 on Xbox One or PS4 – they are not required to be an NFL FLAG athlete. Registration is free and open to players between the ages of 8 to 15. However, spaces are limited. 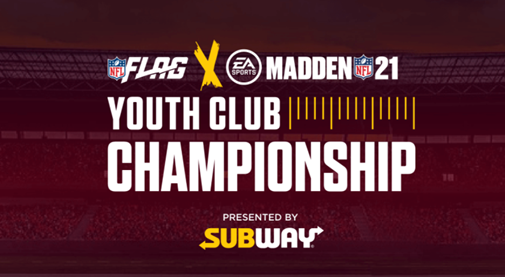